You are here: Home » Blog » Artists I Admire » By the time you’re done reading this… 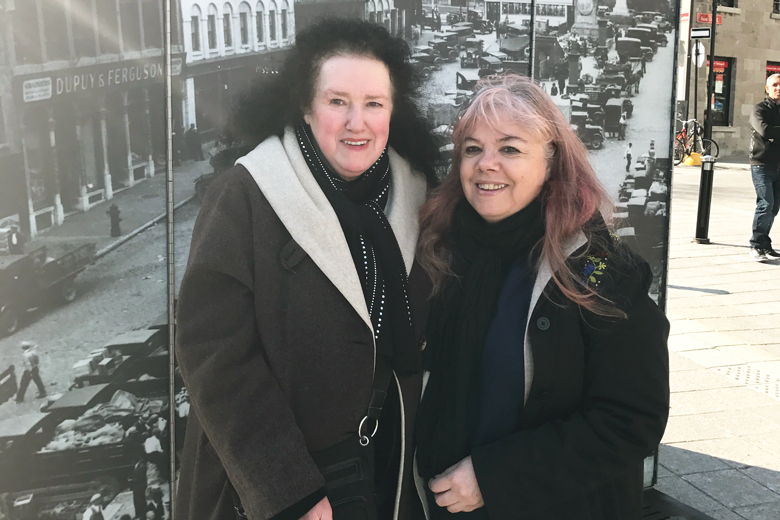 By the time you’re done reading this, you’re not going to believe me…

Prior to leaving New York City in 1990, I was in a French Canadian documentary entitled “New York Doré.” It was an honor, to say the least, to be selected to participate in this phenomenal project. The director, Suzanne Guy, had befriended me, and we would occasionally hang out in Manhattan, chatting and exploring while I got to practice my French—which was getting rustier by the minute!

Many things happened in conjunction, and by the time my portion was filmed, I was beginning my exodus from the City. There was a big opening held in Montreal that I attended, and after that weekend I lost contact with Suzanne…

Fast forward 27 years and I decided to see if I could find and contact her. Since I was heading to Canada and planning on spending five days in Montreal, what did I have to loose? Miraculously, given Suzanne’s dislike of social media, I was able to find her and set up a rendezvous! Seeing her on the landing of our adorable Airbnb was as if I’d seen her the day before. It was as though no time had passed… and I asked myself several times that day, why had we lost touch? Luckily, Suzanne felt the same way!

We went for coffee and got to talking. A friend from New York who was with me asked Suzanne if she ever got back to the City; Suzanne said she rarely went, but did have a trip coming up. She is working on a new film about an artist who had been there in the 80’s. When she mentioned his name and it sounded familiar, but I couldn’t quite place it. Then she said Hoboken. I blurted… François Morelli of Hoboken? Yes, she replied, do you know him? Yes, of course I know him. I used to hang out in his studio across the street from where I lived, and his girlfriend was my first bookkeeper (for my NYC Design firm). I had heard he was a little disappointed not to be chosen for “New York Doré.” And now, as fate would have it, you are doing a whole film, on just him!

Suzanne then told me that I have to come back for the opening this fall. He’s going to have a grand exhibit in a gallery owned by a Belgian Baroness… really! (It just keeps getting better!) Yes, he’s one of her artists. He’s having a one man show, and his work will fill the entire 3 floors of the gallery!

Later as I am relaying this story to my good friend, Dan O’Neill, who teaches printmaking in Halifax at NASCAD, he pipes up, “I know François… he was here a couple of years ago working with one of the printmakers.” Now I am trying to get Dan to meet me in Montreal in the fall… I would love to show up together and support François. Wouldn’t that be a blast?

So, do you still believe me?

New York Doré Film Synopsis: The varied, moving and sometimes contradictory testimonies of Quebecers expatriates in New York highlight the difficulty of integrating into the various megalopolis American, artistic or financial, often as closed as a private club. On the intimate level, the shock is equally sharp. The participants share a passionate relationship with this city, with all that it entails of simulation, attraction and disproportion, whether they are artists, psychiatrists or in business. Some have lived there for 20 years, others have just arrived. The director seeks to define their attachment to New York but also the reasons that motivate this desire for exile. As a counterpoint, the camera explores the architecture and texture of the city by integrating a fictional video report. Images of the destitute illustrate the flip side of the fascination of a city where everything can happen.